Yes, reader, I own a dishwasher! In all honestly, I have never felt such peace of mind or bliss as I do now. This purchase has changed my life in just a few hours. I can’t begin to explain just what it has done for me, but I’m sure as hell going to try. All my life, I have lived without this modern convenience that has been around since the 1950s. Everybody had one but me. It really doesn’t make any sense why I’ve had to spend two and a half decades this way. It’s unpardonable, truly. I think it’s child abuse. When I lived in Paris, my apartment had this gorgeous stainless steel dishwasher that I had to fill with salt. I still don’t understand why, but I learned how incredible it was to have a robot do work for you. I had caramel cemented to a whisk from Le Cordon Bleu pastry school, and I was absolutely sure it was ruined. It was not! The dishwasher took the hardened and burnt caramel right off. It was as good as new. I screamed in joy. But then I went home to America and resorted to washing dishes by hand. It was the worst thing that has ever happened to me. Dishes are literally the only chore I can’t stand. I like cleaning and keeping a tidy home, but I absolutely abhor dishes. So, they pile up and up until they become threatening. I decided that it was time to research and found that there is such a device as a portable dishwasher. WHO KNEW? WHO KNEW I COULD HAVE MODERN CONVENIENCES IN A KITCHEN THAT HASN’T BEEN UPDATED SINCE THE 1940S?????????? I didn’t. So, I researched and ordered one from the Home Depot. When I could pick it up, there was a horrific blizzard — typical — so I had to wait a day. A friend and I picked it up, and it was a breeze to install in my house. You connect it to your sink faucet for the time that it runs and then wheel it back. I loaded it up, turned it on, and when it was complete and I opened the door, I literally started crying. It was one of the happiest moments of my life. I have found a new quality of life, reader. Never again will I suffer unending depression because dirty dishes glower at me from my countertop. I AM BLESSED. I AM LIVING FOR THE FIRST TIME IN MY LIFE. 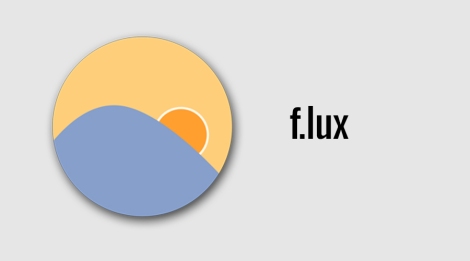 I can’t recall how I found this app, but I love it dearly. In fact, I like it much more than I ever anticipated. It’s totally in the background, so after a few days you don’t even notice the effects of this app, but when you do, they are remarkable. That doesn’t tell you much of anything if you don’t already know what it is. F.lux is an application that knows exactly where the sun is in relation to you and dims or brightens your computer monitor to an appropriate level. So, in the evening, it will be dimmer and take on a slightly yellow cast. In the day, it will automatically become brighter and bluer. This is done so intelligently and so brilliantly, and allows for marvelous customization, so you really can’t tell that you have an app on. Tonight I was doing some picture editing and I wanted to be sure that I had the most accurate color representation possible, so I paused the application for a few hours. I was absolutely stunned by how uncomfortable I was with the screen’s natural brightness. I don’t have anything else to say but download this free app this second reader. It has made me so happy for absolutely nothing. I didn’t know how much I needed it until I had it.

I have a deep loathing for Facebook, even though I use it every day and cannot honestly see that changing in the future. It’s a wonderful tool for sharing your life, organizing your existence for future biographers, and for seeing what other people are up to. It is not interesting anymore, though, and there is a shocking lack of originality. You surely understand how exhausted I am of slow cooker recipes, Buzzfeed articles, Republicans, uninformed Democrats, Minion memes, and game requests. It’s stupid. When I first signed up for Facebook, everybody was sharing pictures of their lives, making interesting posts, asking questions, or just telling a joke. Now it’s a knockoff version of Tumblr for people who are offended by everything. The other night, I sat down and blocked all the people who didn’t bring me joy. (This was done mainly because I was procrastinating reading The Decameron for my Humor in Literature class.) I found dozens of pages that I don’t recall liking. I got rid of a few truly nasty creatures. I rehashed my musical interests. And then I was quite relieved. Now I only saw the people I liked, but they still weren’t very interesting. (No offense, dear reader, if you’re my friend on there. But if you’re reading this, I doubt it’s you.) Facebook was still utterly dull. I decided to like a bunch of different pages that bring me happiness, and I’m starting to really enjoy Facebook again. I now follow dozens of Egyptologists, museums, historians, and genuinely amusing people. Seeing news of the latest exhibitions in Paris and discoveries from my beloved Egypt makes loading the app fun again. It felt like a necessary purge, and I’m truly excited by how happy it made me. Next up is getting off of dozens of email ads that I couldn’t care less about. This year, I think, I’m going to be about minimizing. Abundance generally fails to make me happy unless it’s money, food, kittens, or clothes.

I had every intention of going to caucus tonight, I might still if I get my college garbage done in time. I went in 2008 and watched my beloved Hillary get beaten by John Edwards…of all people. It was dissatisfying and I found it far too tense for my liking. I’m very happy with President Obama, though, so I don’t have too many hard feelings. So, in preparation for the big night, I looked up my caucusing location thinking it would be somewhere nearby. It is not. I would have to drive twenty minutes to some village I’ve never been to in my life. Not only that, the caucus is being held in somebody’s living room! That’s silly. So, I might not go. Don’t flay me alive, please. At times like this, when candidates talk about voting reform and trying to make each eligible voter go out and vote, I wonder why the system is so difficult and outdated. Why can’t we make politics like a reality series and use an app to vote? I have no doubt that there would be some kind of security issues, but I think this should be investigated. If I could support a caucus candidate from the comfort of my kitchen while I’m making soup, I think the world would be a better place. I already request mail-in ballots for each election, I don’t understand why something similar can’t be done for caucusing. We could fill in a ballot with our choices in descending order of preference, these would be tallied up, and we’d have a winner. Seems much more efficient to me! (Oh my god, I just realized I’m basically detailing what happens at a Republican caucus.) But, that would require a revolutionary amount of work to implement in an app. Still, I think it is something worth considering in the future.

My dear and darling readers, I have never been so betrayed by a product in my life. I am still not over the shock and hurt I felt when I baked this pizza. I have, for decades, been a strong advocate for the deliciousness and convenience of a Jack’s frozen pizza. They aren’t gourmet, by any means, but they are easily doctored up to be something rather delicious. I find this magical, and I once considered doing a series of blog posts about the different ways I have converted a basic frozen pizza into a gastronomic triumph. I never did though. I was at the grocery store the other night, and I saw a new variety, one with a rising crust. I am a fan of thin crusts, but I’m willing to give anything a try. So, with eagerness, I turned my back on my usual and bought this. WHAT A MISTAKE! I baked it with the same love I always feel, but it tasted like actual garbage. That’s not true, actually, garbage would probably actually taste like something. This was just thick, bready, NOTHING. It retained heat as if it was actually baked by Satan himself in the very deepest pit of hell, and I fried the roof of my mouth. It’s been a week, reader, and I am only just starting to recover from the third degree burns I suffered. Never buy this product, reader, it is irredeemable.