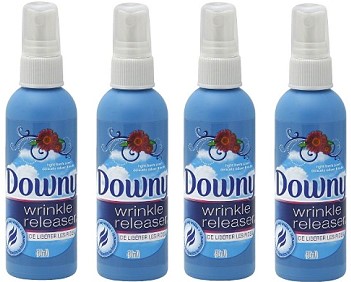 I don’t mind ironing, but I never do it. It’s nice to have a crisp, clean shirt, but what a pain to haul out the iron and board. I hang my clothes up ever so slightly damp so that the wrinkles fall out, but sometimes they are inevitable. When I was shopping for travel necessities for my recent trip to California, I found a small bottle of Downy Wrinkle Release in the miniature section. I squealed and grabbed one and then promptly forget about it entirely. Yesterday, when I was getting ready to go out to lunch, I looked adorable in my favorite white shirt, but it didn’t look good filled with wrinkles. I pouted, but then remembered about the bottle of Wrinkle Release in my cupboard. I didn’t expect much, but when I spritzed it on the shirt and tugged on the fabric, my eyes widened in true shock. The wrinkles really just vanished. I don’t understand this witchcraft, but I need a lifetime supply of this miraculous product. It smells incredible, too, like going into a laundry mat! I like the smell of laundry chemicals. If I become a celebrity, my eventual fragrance will smell like laundry, a hotel pool, and verbena. It’s weird, but whatever! 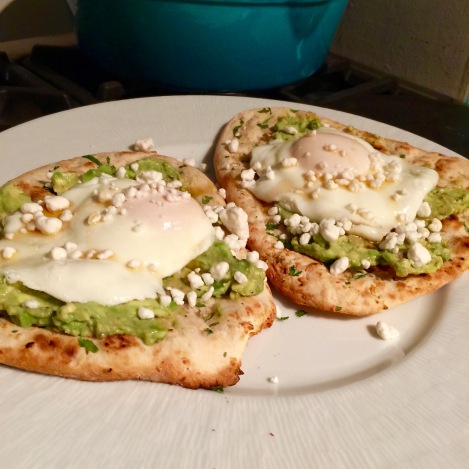 Ever since I forgave avocados for being a disgusting fruit unworthy of sharing the planet with me, I have really grown rather fond of the alien things. I still find it peculiar that something so heavy and oily can dangle from a tree in a wrinkled, leathery shell, but whatever. I’ll add the damn stuff to anything now. The other night, I was rummaging through my freezer in search of something to eat that wasn’t going to take long to make. I came across some Trader Joe’s naan and inspiration struck! I mashed up a very ripe avocado with lemon, garlic, herbs, and sesame oil. I slathered this on top of some garlic naan, and then topped this mixture with basted eggs and crumbled goat cheese. Speaking of basted eggs, have you ever tried this miraculous cooking method? I’m obsessed; it’s like a poached egg without the swirling water and vinegar and tears. Heat up a skillet, crack in two eggs, toss in a couple tablespoons of water, and cover until the whites are solid. It takes like three minutes and they’re flawless. This combination was protein dense and effing delicious. I’m out of naan now, and this is a disaster. I’ll have to make some…is that hard? I doubt it. Cook, reader! 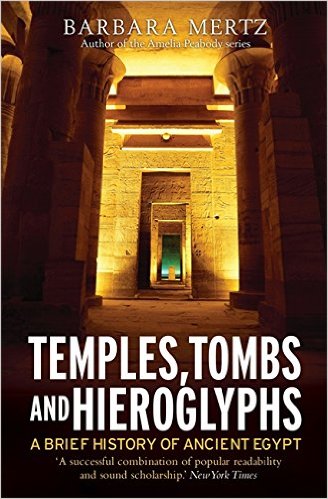 Barbara Mertz is one of my important role models. In my personal pantheon, she is in the upper echelons and sits beside Joanna Lumley and Joan Rivers. Barbara is one of the most daring of women, well she was. She died a few years ago, unbeknownst to me, before I got a chance to send her endless letters. I regret that. She trained as an Egyptologist at the University of Chicago long before it was common for women to do so. After graduation, she became a writer and crafted the books that woke up my dormant love for that ancient land, The Amelia Peabody Series. I legitimately can’t tell you the immense impact those books made on me. But, onto this one. Once in a great while, Barbara would write books with her actual name, not one of her charming noms de plum. In these texts, she would share her knowledge of ancient Egypt in a humorous fashion. She is witty and sarcastic and utterly fabulous. She playfully discusses how boring aspects of prehistory are. She wittily elaborates on tombs and hieroglyphs. She rhapsodizes on the civic calendar of ancient Egypt. And I’m only a short way into the book. I downloaded it from Audible for my book of the month, and I honestly can’t wait to hop in the car on the way home to hear fifteen more minutes of her spin on history. I even look forward to going on walks for the chance to hear her. I love that woman. I’m so sad that she’s dead. But, I think she will be happy to know that her memory lives on forever in her books and interviews. Much like the ancients she studied, saying their names gives eternal life. 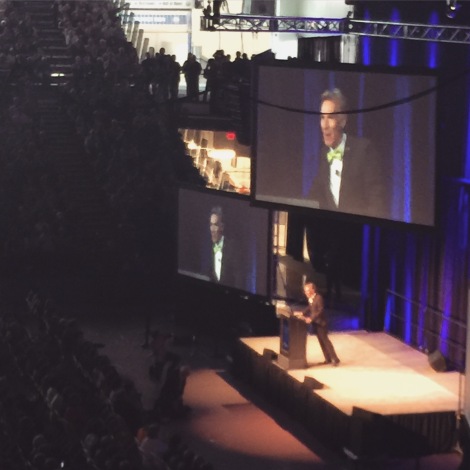 All Americans who went to school in the 90s and 2000s grew up with Bill Nye the Science Guy. His quirky, educational videos were ubiquitous in science rooms around the country, and we still watch them at the district I work in. Science, like any field, is always changing and our understandings evolve, but the basics are rarely radically altered. So, Bill will be around until the end of time, and students (and adults) will forever gleefully chant, “BILL! BILL! BILL!” as the opening credits roll. Last weekend, I found out that Bill Nye was coming to lecture at Drake University and that it was free and open to the public. No way was I missing a celebrity! A couple friends and I made our way to Drake, whipped into a parking spot, and got decent seats in the nosebleed section of the basketball arena. After an unnecessarily lengthy introduction, Bill came out to an audience of over seven thousand, and he was marvelous. I was intensely uncomfortable sitting in a bleacher, but as Bill went on and on about sundials, I started to feel that odd feeling that comes over me once in a while. It’s all about the meaning of life. It strikes me at unlikely times. There is never a rhyme nor a reason why it should happen. The last time I felt that epiphany was last November after the terrorist attacks in Paris. I was overwhelmed with love for the world. It was a profound experience that changed me. Spontaneously, (though of course not) Neil deGrasse Tyson called Bill while he was talking about Mars exploration. (Just to take a quick detour — would you ever want to go to Mars? I talk about this more than seems reasonable. I just don’t understand why anybody would want to go to a barren rock without five star hotels or bakeries. Can you sip hibiscus iced tea on Mars? I doubt it. So, I’ll stay firmly here. However, my understandings about why somebody would desire to make that lengthy trip were expanded by the lecture — back to the narrative.) After a few minutes of joking, and after we all gasped in unison to be speaking to two esteemed and famous scientists at the same time, the crux of what Neil and Bill were trying to get at was explained. Life, you see, is all about learning. That is the only thing you really have to do while you’re on this planet. And isn’t that wonderful? (I was getting misty eyed at this point.) Then they said it, the line that made me nearly gasp. Science, their passion, is all about the joy of discovery. That’s so similar to my own philosophy of life, and it was just a wonderful, impactful, inspirational, and divine moment. I have always believed (since I read it perfectly expressed in writing the first time thanks to ardent amateur Egyptologist, Amelia Edwards, in her marvelous travel memoir, A Thousand Miles Up the Nile.) Life, my dear and darling readers, is the satisfaction of a purposeless curiosity. That’s how I live. That’s what they implied with different words. It was magical. I had a celebratory mimosa later. That was a wonderful lecture and I won’t soon forget it. 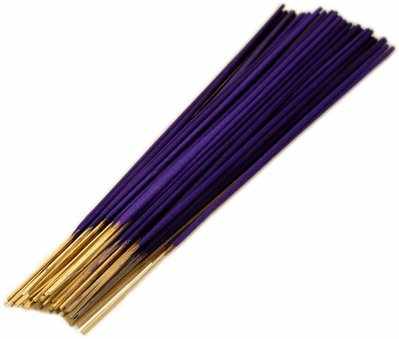 When I was in the peculiar witchy village of Halcyon, California last month, I was enamored of an incense that smelled as if it were in an Indian temple. I’ve never been in an Indian temple before, but I took them at their word. It smells gorgeous, and I’ve burned through all my sticks. Last night at Walmart, I decided to treat myself to a soapstone incense burning box, which is much more elegant than I would have expected for $5. I needed a new fragrance to light on fire, so I grabbed a sachet of lavender sticks. I took a whiff, but I did not feel like I was in the fields of the south of France. I was not in Grasse or Villefranche, no. I was transported somewhere, but I was firmly in Des Moines. Dear reader, I had a moment. You see, those lavender sticks smelled exactly like the Egyptian Treasures store that used to be in Des Moines. I exaggerate aplenty and often say that something has utterly changed my life, but I’m serious about this. The Egyptian Treasures store completely transformed me. It is the reason I dedicated my life to the history and culture of ancient Egypt. The store always smelled intensely like this stick of incense, so I threw it in the basket with glee. At home, I struggled to keep the damn stick of incense lit, but I didn’t mind, for I was in Egypt.

One response to “THINGS I LOVED/HATED THIS WEEK #141”