[I found this post forgotten about on my iPad and I never finished it or published it! Forgive me.] 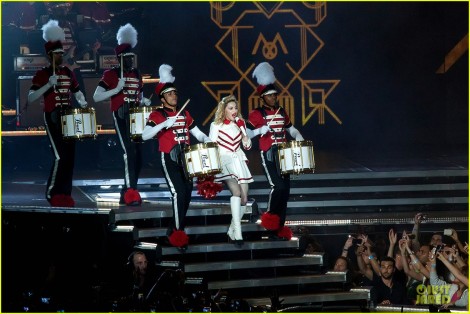 I don’t go to enough concerts. I blame my geographic location for this. People come to Des Moines, but not often and when they do, I’m all, “Meh. Why aren’t you Beyoncé?” Can you imagine me in a Beyoncé concert? I’d die. I’d just die. Dead. I’m getting all excited thinking about it. I need Bey (we’re very close in my head, remember? Jay always smirks and shakes his head when we get together because her can’t get a word in edgewise. “Hey, B,” she’ll say to me, since both off our names start with B, “another glass of champagne?” “Of course, Bey, doll,” and Jay pops the cork off another bottle and we continue gossiping about our celebrity friends, which celebrity babies we will make sure Baby Blue dates in the future, we riff a little, write some songs, she begs me to sing with her on her next album, but I decline because I don’t want to make it all about me. She’s whining now, so to make her happy, I consent to record with her and sing in the tour, too. It’s really tiring to be so close to Beyoncé, but I’ve come to love it. Now we’re going to try on some Sasha Fierce wigs and smile politely when Solange comes over to play us her new EP.) to release her next album. I saw a picture of her in a recording studio the other day and I completely lost myself. 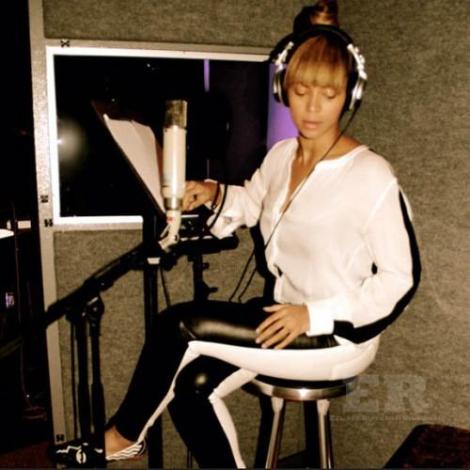 Anyway, I haven’t seen Beyoncé in concert, yet, and that’s a real shame because we’re wasting BFF time. I have seen Britney Spears, Janet Jackson, and the Pussycat Dolls, though. And, I can now add MADONNA. Jealous? You should be.

I didn’t think I would have the chance to see her on her latest MDNA tour, but in a strange twist of luck, Madonna and I were both in the Twin Cities at the same time! It was so good of her plan her tour around my hectic schedule. Good old, Madge. There was no way I was going to miss that, so I bought myself a ticket and hoped that they would be good. 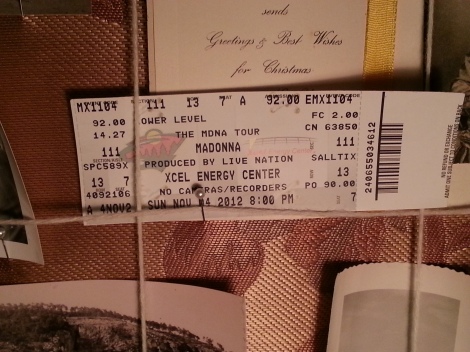 Then I had an agonizing struggle to answer a difficult question: what exactly does one wear to a Madonna concert? I didn’t have a cone bra laying around, so that was out. So I had to dig around my things and try to piece together a worthy outfit. I assumed I’d be around a bunch of sexy people and I wanted to fit in. So, I wore a bunch of tight black clothes, a denim jacket, and Karl Lagerfeld gloves. I looked great. Hair halfway to heaven, too. I was wearing La Croix cologne, too. La Croix, sweetie, La Croix!

We had to leave late because Ma and Jessica were still working until early evening, so it took forever to get there and I was worried that I might miss something. I was delighted to find out that Madonna prides herself on being late, she didn’t come on until after 10:30 and the opener was scheduled to go on at 8. Paul Oakenfold? Whom? I Googled him, still confused. Whatever, I guess that I wasn’t missing much.

So, we drove fast and arrived right at nine o’clock and tried to find our way in. Cars and people everywhere, so we left Jessica in the street, much to her horror, she’ll die in a gunfight someday, and hurried in. I would have gone in alone, but Ma used her credit card to place the hold.

Inside, I began to think I overdid my outfit. There were old people in suits. There were old women in clothes that I think they thought became them. It may have in the eighties, it didn’t thirty years later. Poor people. There wasn’t even a selection of attractive young gays. Where were they all? Why was I so stunning? 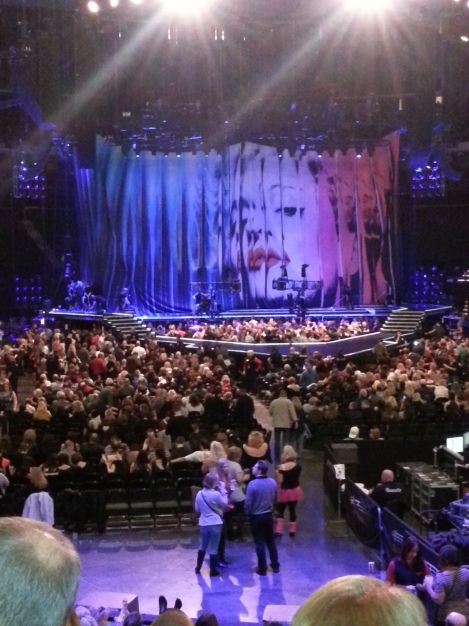 So I walked and I walked and I finally found my section and my seats were awesome, but I seemed to be seated in the prude section. To my left were two guys who were tapping their feet out of rhythm to Paul Oakenfold and to my right were two women who looked pissed to be there. Whatever. I sang and danced, haters gon’ hate. 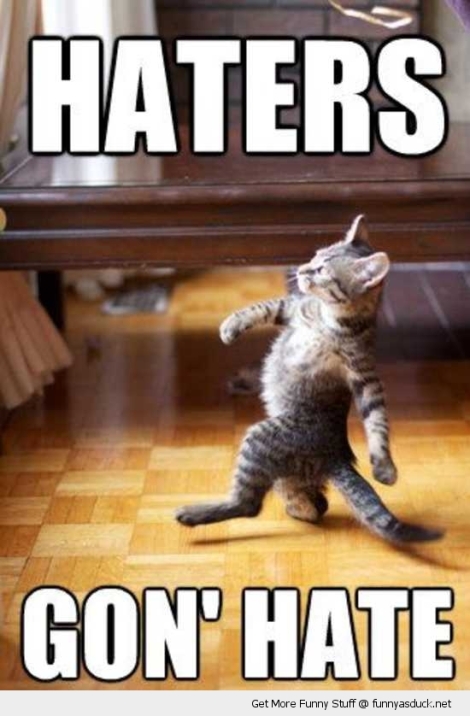 Turns out that Paul Oakenfold is a DJ. He is also very old. He actually looks like a middle-aged Louis Jourdan. Am I the only one who can visualize that without a photographic aid?

I’ve seen too much TCM this year. I don’t get DJs. They don’t really seem to be doing anything. Every time I’ve been at an event featuring a DJ, I study them and wonder what exactly they’re being paid for. They aren’t spinning records, they hit play on a playlist. I love watching them, though. They’ll look intently to the crowd as if trying to psychically sense the song we all want, then hits play on something in the top ten dance list. After this they’ll throw their headphones off and throw their hands in the air as if saying, “Look at the masterpiece I have created! I am a musical god!” Then we all are supposed to dance around. It’s awkward dancing by yourself, just ask Robyn. MANDATORY DANCE PARTY:

Then we sat around for awhile. The two prudes to my right seemed to be complaining about something or other. I tried to eavesdrop, but I was kind of hard of hearing after hearing a half hour loop of Rihanna’s new song about diamonds. It’s better than some of her other music. Probably because Sia wrote it and she can do no wrong. Do you follow her on Twitter? She seems a bit mad. I love her for it.

We sat some more. I was tired of sitting. And then, after an agonizing eternity, darkness fell, and some monks came out to ring a bell. They then began chanting, which is lovely, and if you listened closely you could hear that they were chanting her name. This made me laugh, bitch wrote a Gregorian chant about herself! I love that. And then she arrived! 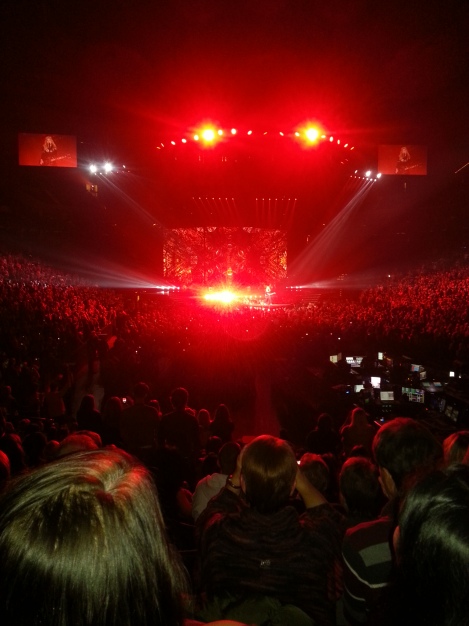 The first section of the concert was very dark and very violent and the crowd was definitely not into it. Even I admit that it was a bit too much. I understand the symbolism and the necessity to showcase raw anger so that the show can build into the euphoria that came later, but it seemed so very cruel. She sang “Girl Gone Wild,” “Revolver,” “Gang Bang,” and “Papa Don’t Preach.” During this entire time, she slaughtered her dancers a dozen times each. It was a violent orgy of bloodshed and I admit I wasn’t enjoying that much. I was still singing. In fact, I think I was the only person in the place that knew all the lyrics aside from Madonna. I tweeted a hilarious joke: “Madonna just got her guns out, and I don’t mean her freakishly toned arms.” And it had no retweets! Do these people not have a sense of humor? 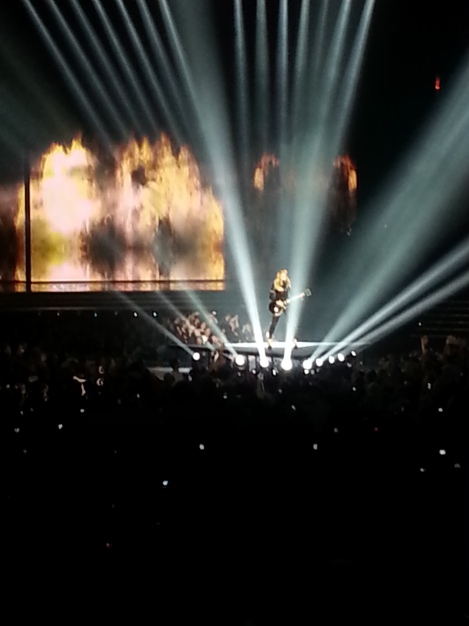 After a few more songs, we finally switched on the lights and had some real fun. No more angry guns. Madonna had a beret! She sang “Express Yourself,” sampled “Born This Way,”  and “Give Me All Your Luvin’.” There was a marching band that was floating in the air and that was all kinds of awesome. The drum corps were flying around as if it were the most natural thing in the world. I was obsessed. My neighbors weren’t. They left after a while, whatever, more room for me! I loved when she performed “Open Your Heart” as if it were in the middle of the Congo. “Masterpiece,” a gorgeous song, concluded the second act. 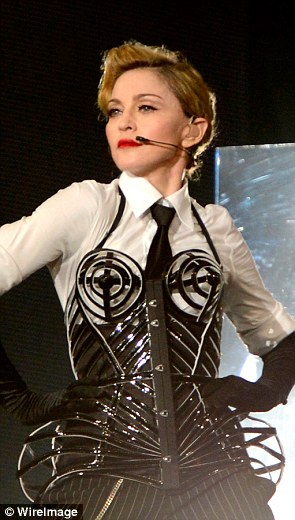 The third act was easily my favorite. It was fun and joyous. It dripped with art deco elegance and hope for the world. She sings “Candy Shop” interspersed with “Erotica.” She then bursts into “Human Nature” before putting on the most tortured rendition of “Like A Virgin” you can imagine. It’s only accompanied by a live pianist and Madonna writes around on the floor, looking like she’s about to die. It was odd, but riveting. She also begged the people on the floor for money. Good fun. 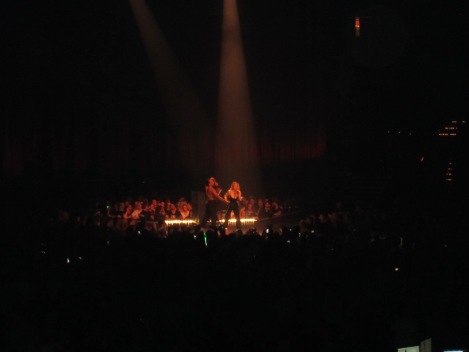 I should have taken notes because there was a moment during the concert that was the very definition of the word epic. This poor overused expression seems to be finally being phased out and I could not be happier! Anyway, Madonna got all serious on us and told us to get our asses out and vote and to support Minnesota’s marriage amendment that wouldn’t make same sex marriage legal, but to make it possible in the future. It shut the place down. When she spoke about equal rights we lost our shit and I wouldn’t be surprised if the roof was lifted up a few inches. It was a great moment. 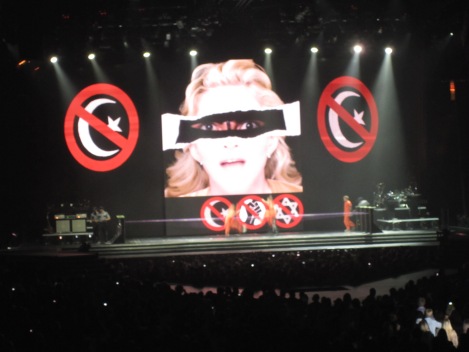 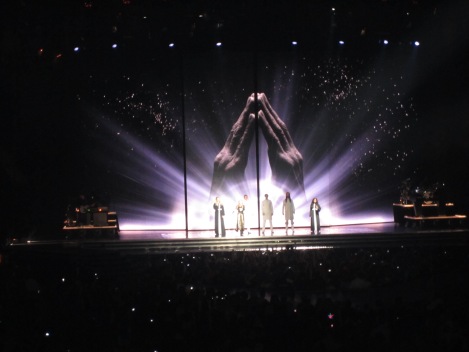 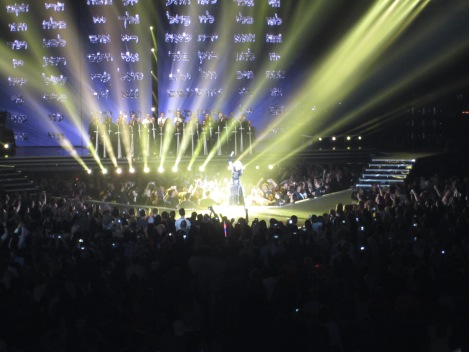 I scurried out of that building and somehow found myself walking next to a very, very drunk woman. She said to me, slurring, “Guess what I got for Christmas?”

“What?” I inquired, worried where this was going.

She smiled at me and slapped my back. “You’re funny. Do you have kids?”

“DON’T HAVE ANY FUCKING KIDS.”

At this point, my phone blissfully rang and I excused myself. I wonder what that was all about? Ma and I went to IHOP afterwards where I had the world’s largest omelette. It seemed like it anyway. We went to IKEA the next morning. A good time was had by all. 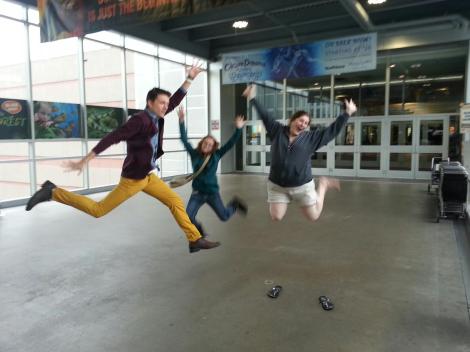