Even though it would be nicer if the apartment was in Paris instead of Clichy, I think it’s marvelous. Everything, well almost everything, that a person could possibly need to be comfortable is here — except for a cutting board, a decent knife, and a spatula. I don’t understand how anybody can function without a good knife, it’s the most important thing you could have in your kitchen. I may go out and buy one. Anyway, there’s even a towel warmer in the bathroom, and if that isn’t the classiest thing in this whole world…well, I don’t know what is.

I’ve decided that I already am going to need new clothes. Either that or I’m going to have to up my eating game into unknown territories. I forget how quickly and how much weight I lose when I go to Europe. It’s strange, and I’m not bragging or anything…well, not too much, but the weight drips from my body. I’ve lost seven pounds since I left my home country. That’s surely all from walking. I walk miles every day. I walk miles back home, too…so this isn’t really solid evidence. Maybe the food is healthier here, even though I don’t eat much garbage back home. I’m fairly health conscious.

After getting dressed up for the day, Jessica and I went into the bakery a couple numbers down from us. There are bakeries everywhere here in France and that’s just wonderful. You could tell we were in a more residential area of town based on the offerings and the décor. In central Paris, the boulangeries and pâtisseries are opulent excursions. The cakes are sleek and gorgeous and artistic. The interior design is often indulgent. The variety of breads is enough to make your head spin. Not at this local bakery, though, which is no way a bad thing. There was a rudimentary selection of the basics. I had a decent croissant and Jessica had a strawberry tart that she found all right. 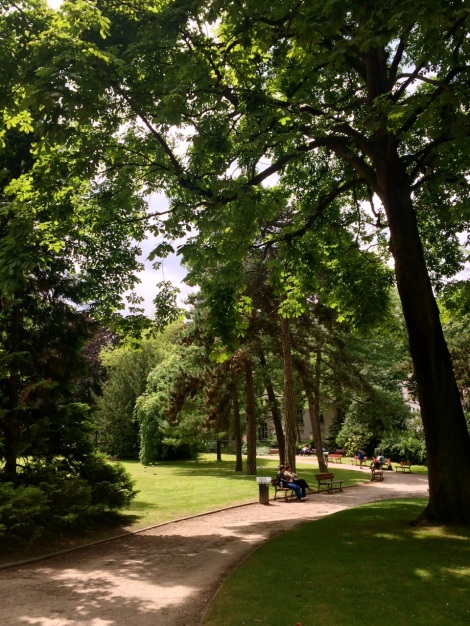 We ate our treats in the absolutely charming park down the road, the Parc Salengro, which is named for a French politician who killed himself after some vicious slander from a right-wing political party. Even though that’s rather macabre, the park itself is far more lovely than I had expected. In fact, Clichy exceeds all my expectations. I rather expected it to be a ghetto. It’s not at all. This park is lovelier than some of them in Paris, and I think I’d rather spend an afternoon with my journal in the Parc Salengro than in the much posher Place des Vosges.

We wandered through the twisting alley ways and Jessica cried out to every bird she saw. None of them responded favorably to her, but this did not reduce her ardor for them. She has a bizarre enthusiasm for winged animals. She was especially deranged as we passed by a lake full of ducks.

From the park, we went into Paris and promenaded up the Champs-Élysées. Mandatory musical interlude:

Now, reader, I must tell you something. The Champs-Élysées is an emblem of Paris as much as the Eiffel Tower or Notre Dame or baguettes or berets or striped shirts, but it is an infested hellhole. It’s about as authentically French as the French pavilion in EPCOT. It’s a tourist trap full of every shop you’ve ever already been to. There’s nothing unique on the Champs-Élysées. There’s nothing nice there. It’s overpriced and stuffed to bursting with tourists. Still, though, on quiet nights or in the autumn or a warm winter’s afternoon, it’s rather nice to stroll down this famous street.

I was gobsmacked and heartbroken when I finally saw the shuttered doors of the Virgin Megastore: 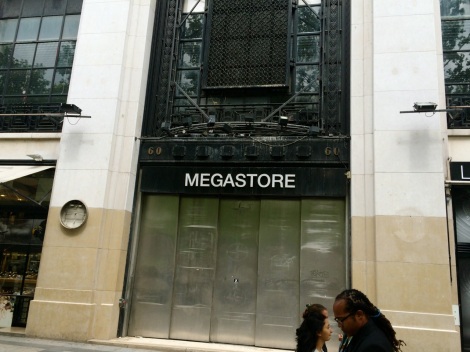 I never thought this day would come. The Virgin Megastore was one of my very favorite places in Paris. You can look at books all day, find obscure DVDs, discover new music, buy nearly anything you want. It was always one of the first places that I’d go when I arrived in Paris and I’d often go there a number of times a week. Now it’s gone. I’m really sad about this, it’s like saying goodbye to an old friend.

We stopped by the McDonalds, which basically sums up everything I was trying to tell you about. In America, I wouldn’t be caught dead in a McDonalds, but in France, I don’t mind at all. I don’t eat their hamburgers and things, instead I eat their remarkably tasty pastries. I didn’t on this occasion, but we’ll get to that later. 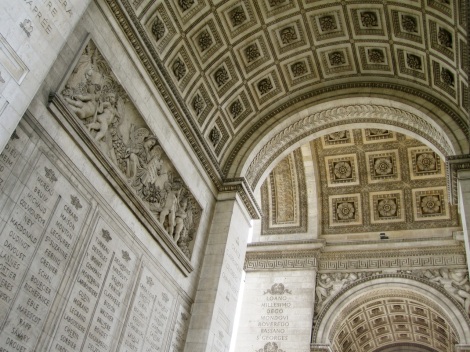 We walked down the Champs-Élysées to the Jardin des Tuileries, the gorgeous gardens in front of the Louvre. They are already setting up the the 14th, France’s independence day. It appears to be quite a spectacle, there are seats everywhere! I think that’s rather civilized. Back home we always have to stand up for a parade. I loathe parades, actually, but I look forward to seeing this one. Just to say I’ve done it, you know?

The tourists at this time are rather like an infestation — I’m not a tourist, of course. They swarm like a plague of locusts through all the streets and major attractions, taking poorly framed photographs of nothing with cameras larger than their heads. This infuriates me. I admit that I’m somewhat known for my travel photography, but my methods of photography aren’t entirely elegant. I just see something pretty and take a quick picture. People with their DSLR cameras with all their knobs and nonsense are just so silly. I’ve moved to taking pictures with my phone. The camera is phenomenal on my iPhone, actually.

Anyway, there are so very many people in the city right now. The Métro announcements are in about fifteen languages. There are alerts about pickpockets on every wall.

By the time we made it through the Tuileries, we were absolutely famished, so Jessica and I decided to go to Café de l’Industrie. This is a place that invokes such terror in us. In my research, I’ve discovered that it something of an institution, but I’ve never gone, which is just stupid. My first apartment in Paris sat on top of it, literally, I could smell their kitchens in my elegant rooms that were filled with dentil moulding and small, but tasteful chandeliers — I think that’s the place that first made me who I am aesthetically. I would never go into the café, though! I was too scared of it. I don’t know why. There was just something about the hustle and bustle that overwhelmed me. But, today, we decided to go. It was perfectly fine. I had a pasta with a tasty pesto and Jessica was very satisfied with her meal, too.

There was a garbage that came out of the floor in there and that was remarkable. Jessica and I were mesmerized. The special of the day was tomatoes farci à la Provençal, but they were stuffed with meat instead of bread, so I decided against those.

From my seat, I could look up at the windows of my old apartment, where I lived whilst at Le Cordon Bleu. It was kind of weird. 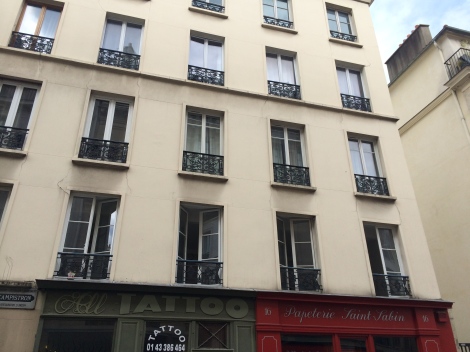 After our late lunch, we wandered through the Marais, the part we love, where we stayed a few years ago for month. It’s where all the old people live and that fits me just fine. I’m ancient on the inside.

So, we just kept sauntering over the bridge and onto the Île Saint-Louis, the smaller of the two gorgeous islands in the middle of the Seine. There wasn’t much of a line at Berthillon, that glorious sorbet shop, so we both got a cone and sat on the quay and enjoyed our lives. 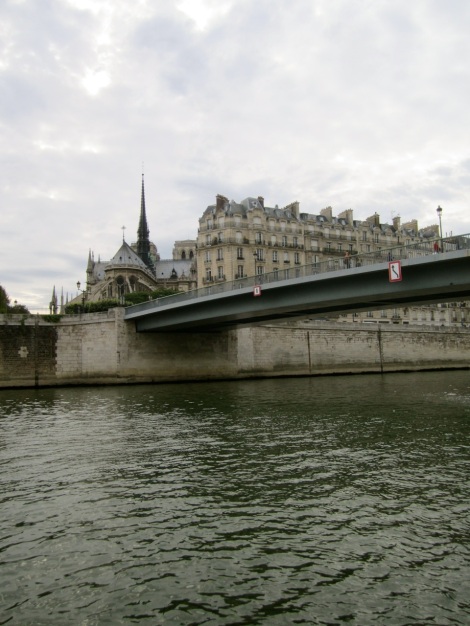 Paris is, after all, an awfully nice place to be.