The most important thing in the entire world is looking nice. You should never leave your home looking like a peasant. When I get dressed each day, I think of one of these things:

1. What if today is the day I meet a talent scout for a modeling agency?

2. What would Prince Harry wear?

3. Are you disappointing your fans?

Sometimes I think of all three. Getting the right look is easy when you have style, but it can be difficult if you have a limited wardrobe. Thankfully, I have an abundance of both taste and clothing. Today I looked delightful, not going to lie. If I had been for a walk in Paris and not in Des Moines, gentlemen would have been catcalling me. It’s happened before and I wasn’t even dressed very nice that evening. Ah, such fond memories! Then that one time a stranger tried to make out with me on a bridge. Would have been okay if he wasn’t ugly. I actually have footage of this incident. I should put that shit on YouTube. (I should also have my own reality show.) Anyway, if I had been walking about the Marais as I’m wont to do, I probably would have been engaged by midnight. Just saying. (You remember I hate when people say that? I’m an exception to my own rules.) I looked that good. Look at me.

“But Ben!” I’m sure you’re crying out, “What prompted you to dress so nice?”

The answer, dear reader, is that I was going to a very nice restaurant downtown called Proof. I’ve long known about it, but never had anybody to go with. I think it started off as a pizza place that proofed their own dough (therefore the name) but then went under new ownership and had a kind of North African theme and then branched out from there into something eclectic and different to the standard fancy food you can get in Des Moines. I gave everybody in my family a gift card to any restaurant they wanted to go to (Ma picked Centro, Jess picked Casa de Oro, and Pa picked this) for Christmas, so off we finally went.

I made a reservation a few days ago and it was definitely unique. You were asked the standard questions: when you wanted to dine and how many would be in your party, but you were also asked how adventurous of an eater you were and how long you could stay, what food aversions you had, and what the last concert you’ve been to was. I honestly don’t know why they asked this, it had no bearing on the meal. Perhaps they just did it to be kooky and memorable? I didn’t really understand, but that’s not important.

So this afternoon I got myself all fancied up, coiffed my hair, sighed that my muscular chest (giggle) was forcing the buttons on my shirt to strain a bit, and shined my shoes before hopping in the car and heading off for Des Moines.

Pa drives like a snail. I could have written a novella by the time it took us to get parked downtown, but we eventually made it. Proof is located right next to Ritual Cafe, a completely vegetarian restaurant that I have been meaning to try. Now that I know where it is, I’m sure that will be soon. Vegetarians love vegetarian food.

Anyway, my initial impression was “meh.” They’re going for an industrial chic look, which is so exhaustingly overdone that I was prepared to actually sigh, but I just went with it. Is it really so hard to put up a nice ceiling? There are elegant faux tin tiles that you can get on the cheap these days. I think they really would have enhanced the look and made the place really pop. The hostess checked our reservation and took us to one of the few tables that are in the restaurant. It’s really quite an intimate place, I approved. I didn’t approve of the tables. The chairs actually. They’re plastic. PLASTIC CHAIRS ARE THE END OF CIVILIZATION. That’s all about that. Actually no, I’m not quite done. You can get decent wooden chairs at IKEA. Fix that, Proof.

The ambiance was quite nice once you took a moment to take everything in and the chairs weren’t uncomfortable. The ceiling still bothered me, though. I admired the crafty handwriting on the chalkboards that detailed some of their wines. There was a real lily on each table, which was nice, but I think lilies smell dreadful. These ones weren’t very pungent thankfully. Pa and I put on our judgmental faces:

Our waiter soon arrived and he couldn’t have been more charming. I wanted his tie. I think it was Ralph Lauren, I should have asked. He complimented my watch. We were given a very sparse menu. One with their à la carte offerings, one with the set menu, and a drink menu. For as limited as they all were, it required some reading, so I dug in. I was intrigued by the scrambled egg appetizer, but I can make scrambled eggs, so I decided against it and went with the set menu: beet salad, something with eggplant, and a trio of strange sorbets. I admit that I was quite wary of the beet salad. It sounded frightening. I’ve never eaten a beet in my life. So, to tame my fright, I ordered a cocktail–it was happy hour, after all. It was called The Plantation and it has changed my life. 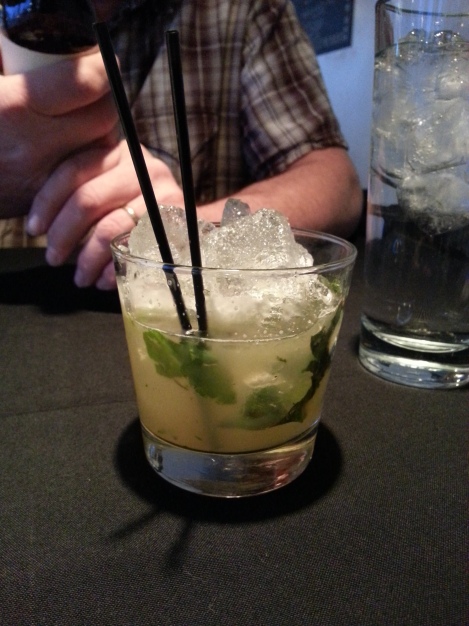 First off. It’s called THE PLANTATION. You all know that plantations basically give me an orgasm. Second off, listen to the ingredient list: Cointreau, fresh basil, pink grapefruit juice, vodka, and lime. It was amazing. I could have had a dozen of these. I sipped it demurely, though, and was very sad when it was gone. I need a recipe for this.

The food took quite a bit of time to arrive, which was apologized for, but I wasn’t in a hurry. I was cold, though, the place was quite chilly–even Pa agreed and he’s usually on fire. I watched the waiters bemusedly while I wait. They walk with one arm pressed to their chest and the other to their back like a stereotypical French waiter at a brasserie. Made me laugh. After a bit longer, the salads arrived. I must apologize for the crappy pictures I took of the food. My camera kind of sucks indoors and I kept forgetting to take a picture until I had taken a few bites. Oh well, you get the basic idea.

It was gorgeous before I messed it all up. Made of goat cheese, micro arugula, shaved turnip, carrots, pickled beet, raw beet, beet marshmallows, olive dirt, and I believe balsamic with oil. I didn’t know they made “dirt” anywhere in Iowa. It’s olives that have been dried and powdered and it’s unbelievably flavorful. This dish was extraordinary. I could have used less marshmallow as I wasn’t crazy about them. The flavor was crazy. I’ve never eaten anything like that. The combinations were unexpected and delicious and I now love beets. Who knew?

I began doing something I enjoy doing at restaurants after this course–playing food critic. I get out my Moleskine and ask pointed questions and see what happens. I don’t think much happened here, our waiter was already wonderful, but I like to think that he was even more attentive because of my furious note taking.

The second course was long in coming, too, so I ordered another cocktail, the Dapper Apple. This was made of apple vodka, triple sec, and lime. 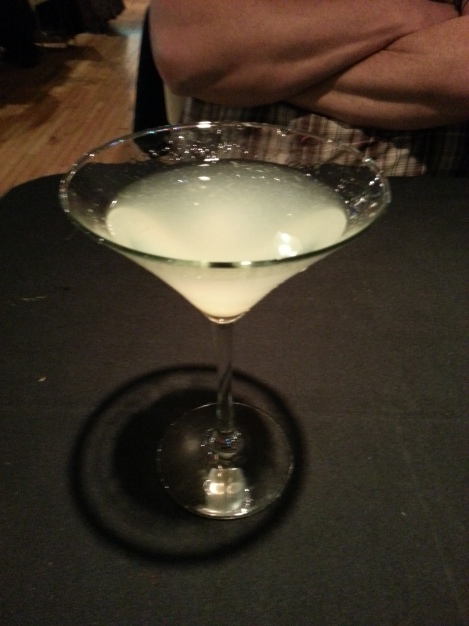 This didn’t thrill me like The Plantation. It was just sour. I wouldn’t turn one down, but after the delights of that previous drink, this one was just lackluster.

The second courses arrived and they were just as lovely as the salads had been.

I’m going to be brutally honest about this. It was gorgeous. It was good. It was boring. It was just a reinterpretation of eggplant parmesan, which is never that thrilling. 1/2 a roasted eggplant with some tasty tomato sauce on top with feta. Very well done, I don’t have complaints except that it was tedious. It was bite after bite after bite of the same thing with no interruption. What could have made it better was BREAD. There is no bread here at all (which, given the name, Proof, seems like cruel irony) and bread would have been the savior of this dish. Not that bread is thrilling or exotic or anything, but you could have had a bite of something else and used it to wipe up that rather nice sauce. A pita, a wedge of baguette, a waffle, something was needed. I was just thinking, and I think that if they sprinkled some garam masala on top of the dish, it would give it some much needed zest. Good, but dull entrée.

Dessert was much quicker in coming. I was immediately jealous of Pa’s dessert. I didn’t order it because I saw caramel, and I don’t do caramel. I had the sorbet trio.

[Rosemary, Apple (or tomato, I was told both things by different people–it tasted more apple), and chèvre.]

Chèvre sorbet is one of the stranger things I’ve heard of, so I was quite curious. Strange but good. I wouldn’t want a lot of it, but it was definitely unique! The apple or tomato or whatever was dull. Didn’t much care for it. The rosemary was absolutely delicious. I would have more of that in a heartbeat. A very interesting course. I also had some coffee that was good. They don’t serve espresso which I found surprising–just get a Nespresso on the cheap. 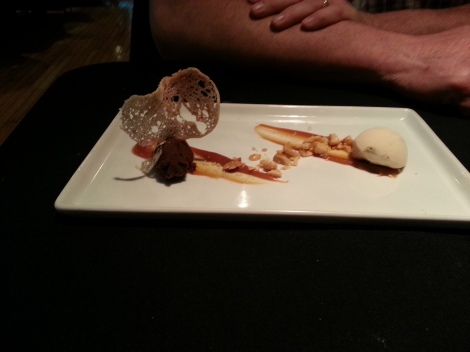 He had what tasted like chocolate ganache–can’t recall what that was exactly–with a cinnamon tuile. Burnt almonds with caramel sauce. And then espresso semifreddo. Whatever that chocolate was, it was outstanding. I wanted a bowl of it. And burnt almonds are all kinds of awesome. Pa wins the dessert round.

Or waiter wondered if we wanted anything else and suggested digestifs when I asked him. We had something with an eight in it. I didn’t take a picture, but it was very nice, very rich. Bitter and kind of caramel-esque at the same time.

Then it was time to pay. It wasn’t cheap, I won’t lie, but it was a neat experience and I’d be happy to go back. But, they really need bread and a better ambient temperature…and ceiling treatment. I’m a bitch about ceilings. Oh, and nicer chairs. They feel fine but look like scheiße.