[This will be the last installment of this blog series until probably September. I’m off for Mexico City in a week, so we will return to my true passion, travel writing!] 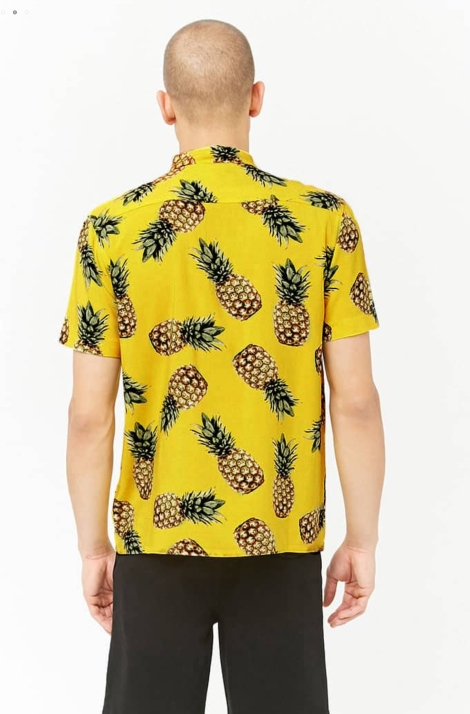 I love a bargain, which is why half of my wardrobe came out of the lady’s pajama section of various Goodwill shops. But I don’t mind buying gorgeous clothing from those shops that sell cheap imitations of designer fashions like Forever 21 and H&M. Of course you have to think about the sweatshops and the children sewing buttons onto my blouse, but you also have to think about how good you’ll look. So it’s an unequal trade off. Last weekend, I decided to treat myself to some new clothing for my summer in Mexico City. When I was there last year, my look was very neutral with lots of black and white and grey and brown. It’s timeless. But this year I wanted to incorporate something with a bit more color, so I’ve been on the hunt for a yellow shirt because no color in the world looks better on me. A few weeks back on RuPaul’s Drag Race, one of the contestants wore the most stunning yellow top, and I lost my mind. I had to have it. Let me see if I can find a picture online. Bear with… Aquaria wore this with several buttons undone and black jeans and it was EVERYTHING to me.

I have no idea why people loathe the color so much. I look ravishing, not to toot my own horn or anything. Facts are facts, reader. Imagine the thrill and rapture that overcame me when I found a silky yellow blouse covered in oversized pineapples. It was put directly in my cart with a pair of black pants that are basically a uniform for me. They finally arrived this weekend, and reader, I look fantastic. I never want to wear anything but my beautiful yellow shirt. I have received nothing but compliments, and for a person as vain as myself, there is simply nothing better. And I had forgotten how comfortable those pants are, they have to be half spandex, you could do the splits in them — which I certainly can’t — but you could. Get thee to the Forever 21, reader, and lose your mind. For pennies you can be endlessly stylish.

Solid bops, reader. That’s what this album is composed of. My favorite song from this year’s Eurovision contest was “Mercy” by Madame Monsieur. They are a French duo that creates what I call minimalist electro pop. The song they performed had a solid beat that stuck with me ever since, even after I realized that the song was about a refugee mother giving birth to a baby in the middle of the sea. And it talked about how many died and how challenging life could be. But it was still a bop. So I downloaded their album, and I have listened to nothing else since that moment. The entire thing is a triumph of pop music. I’m reminded of Yelle and Robyn and that fills me with absolute glee. Every morning I wake up I can already hear my favorite songs playing in my head. “Mercy” is good but can’t hold a candle to the jam that is “Tourner la page” or “Au-delà” or even “Comme une Reine.” The album is all I listen to when I walk or when I clean or when I’m just sitting in the house or when I’m driving absolutely anywhere. I’m in love. And I just discovered that this wonderful group has another album, so I will be listening to that on the way back home from this week’s steroid injection straight into my ear. Supposedly this is the last one I’ll have to do and then when I have my hearing checked again at the end of August, we will find out if it was worth doing. Then I’ll surely get some behemoth of a bill as I tend to do every couple months for no clear reason. That is driving me out of my mind, but that has absolutely nothing to do with this post! Madame Monsieur are fabulous. Get on Apple Music or Spotify or whatever at once and cement these fabulous songs into your brain. You’re welcome.

I have no idea why it took me so long to get a subscription to KMT. It’s a scholarly magazine about Egyptology and there is absolutely no reason why I shouldn’t have been reading it for years. Now that I’m subscribed, it’s been delightful to be up to date on all the current happenings around the world on Egyptological matters. There are detailed reports on the archaeological expeditions being undertaken all over Egypt. This has been riveting to me. You don’t really get to hear a lot about this in the New York Times unless it’s a big deal. You don’t get a lot of reporting on pottery shards, you know? But they go into great detail in KMT and I find myself in a state of archaeological fervor. And then my favorite bit is usually a lengthy segment on museum exhibitions around the world. I try to visit these as often as I can, and it has been tremendously helpful and delightful to know about all the exhibitions happening. Who knew there was so much going on in Austria? I just might need to go find my friend Dr. Waris in Vienna and tour the town. But back to the magazine. It’s a quarterly journal and I await each issue with tremendous anticipation. It’s not only full of riveting and deadly dull scholarly matters, but some of it is so snarky. You would not believe just how sassy Egyptologists and amateur scholars can be. I was cackling this morning reading a review of a “documentary” on the Travel Channel that was deliciously condescending. I want to watch the show just so that I can appreciate the asides the author of the review made. I’m so happy to get the magazine and maybe someday you’ll even read something by me in it! That would truly fill me with joy, to be amongst the same pages as Salima Ikram and Aiden Dodson and all the other Egyptologists that I have read and look up to and idolize and dream of emulating.

Do you ever get overcome with giddy pleasure because you live in the future? I do. I mean, in all honesty, I should have been born to a family of Victorian adventurers who were rich and had a penchant for excavating Egyptian tombs. Or I should have been a flapper in twenties New York. And I should have been born in Paris in 1870 so that I could experience the decadence of la Belle Époque. And I surely would have thrived many times over as an ancient Egyptian scribe. But every now and again something so wondrous in the modern world occurs that I can’t get over it. And reader, this wasn’t even really a big deal but it has thrilled me to my CORE. I’m pretty sure I’ve told you about the Directv Now app at some point on this blog. It’s revelatory. No longer do you need to have a cable box or an antenna, you just open an app and watch live television. It’s insane. You can use it on your Apple TV or on your iPhone or iPad or laptop. It’s genius. And I use it every day. And it’s worth every penny I don’t pay because a friend gave me his password. And I haven’t even gotten to my point yet. But the future is now! You see dear and good reader, now you can schedule shows to record!!!!!!!!!! I didn’t know how much I needed this. I always need to watch Rachel Maddow like at ten, but when she’s live I’m never ready and I don’t want to wait until eleven and now I DON’T HAVE TO! I can go to bed early and have Ancient Aliens tape so that I can scream it with full clarity the next afternoon! And the recordings are accessible on all my devices so I can start a show at home and finish it at lunch on my phone. This is madness. If you told me this would be a possibility when I was a nerd in middle school, I would not have believed you. I mean everything’s awful, but the future is now!

Sometimes terrible things happen to very good people. Reader, something terrible happened to a good person. That good person is ME. One of my favorite restaurants in all this world is closed. Don’t worry, it’s not Table 128 or Trostel’s Dish or Django or even the Olive Garden. It’s Tucci Benucch! I’m devastated. Jessica and I were planning on going tonight on our way to Wisconsin to attend my cousin, Midget’s, graduation. It’s a tradition that every single time we pass through Minneapolis, we swing by the mall and gorge ourselves on overpriced Italian food. And it was more than just a restaurant; it was one of the first good restaurants my family ever went to. It completely changed our culinary horizons. We decided that there was better food than Wendy’s after discovering baked spaghetti. And we met these weird family members there that even to this day i am convinced are part vampire. But that’s not important right now. But the wife had come from like Eastern Europe and she looked like a long lost daughter of Vlad Tepes and I was fascinated. Anyway. Now it’s gone! After twenty-five years, the location at the Mall of America closed and I am distraught and I can’t possibly think about how I’ll manage to go on. Jessica and I discovered that there is a fast food version of the same restaurant with a limited selection of the original menu items, so we are rushing up there after work today to gorge ourselves. Will it be the same? Will it be better? Will we cry? Only time will tell and I’ll be sure to update this before I post this so that you can hear about the miracle or the tragedy or whatever it winds up being. My heart is aching but I’m full of hope. UPDATE: It was fine but it just wasn’t the same. I have always loved the fried cheese ravioli, and the fast food joint had them, but they weren’t fresh and tasted oily. I could have cried. The baked spaghetti was just the same, so that made up for it, but there is something so tragic about eating with plastic cutlery in a take out bowl. Am I being too ridiculous? I don’t think so. So, I can recommend you getting this food to take out and then plating at home on some more fashionable pieces of tableware with nice millennial gold forks. That’ll be fine. And when you’re at home you can imagine that the waitor at Tucci is back with the block of Parmesan and life is decadent and nothing is bad.