I do not come from a wealthy family. I don’t come from a well-dressed family. I don’t come from a fancy family. I don’t come for sophisticates. Therefore, I don’t have a clue where I came from. I have firmly convinced myself that I am the lovechild of Prince Rainier. I don’t know how the logistics work in this fantasy, but it makes more sense than being the product of my parents. I love them dearly, but they aren’t the chicest people on the planet. My father, for the longest time, wore his work shirts from Ethan Allen on vacations. My mother often wears clogs. My sister…my sister is a fashion topic I’m not going to discuss. But, bless them, over the years, they have become a bit better. My father now has a respectable collection of plaid button ups. My mother has learned how to color block. And my sister has a shirt that looks very Versace.

Me, though, my wardrobe is exploding with clothes. I haven’t always been like that, though, I had to discover my sense of style and pay for it. I’m not going to be humble and say that I think I’m a good dresser–I’m damn sure I am. Every day at work is a new ensemble. I love clothing and I think it is one of the simplest and strongest ways you can express your identity. I’m not sure what mine says about me, I think that is left up to other people to interpret. I wear lots of blue. I don’t mind showing off my clavicle. I like slim fitting pants. I adore wingtips–still haven’t found leather free ones. Eventually I’ll transition my wardrobe away from leather, but I really don’t have many pieces, just shoes, belts, and gloves. I feel bad about them. Really I do.

As time has gone on, I’ve grown increasingly fancy in my everyday wear. Lots of dress shirts and shiny shoes and cardigans in strong colors. I like looking nice. It makes me feel important. The most important piece of clothing that a man or woman can own is a gorgeous suit, and that is something that I was lacking.

Years ago, I bought a vintage Dior suit on eBay. I was fat, so it fit alright, but now I’m not fat, there’s over 1/4 less of me, so it hangs on me ridiculously. I should get it out of my closet, but I feel sentimental about it…and it’s Dior, you know? So, I’ll hold on to it, maybe my tailor will be able to save it. I don’t know, the pants are pleated. A horrible thing, that. Moving on to more beautiful things…

I don’t remember where I first heard of Indochino, but I’ve long meant to order a suit from them. I’ve had my eye on the Prince of Wales 3-piece suit for ages and I’m determined to buy it, but when I finally had enough money to order myself something, my eyes fell lovingly onto their burgundy blazer with a herringbone pattern. I simply cannot resist burgundy or herringbone and decided to order it. (Gasper Burgundy Herringbone Blazer)

I needed something stunning to wear to afternoon tea when I’m in London later this month. A little over a week and a half now! I’ve always meant to go out for tea, but never seem to get around to it. I wanted to go to the Ritz because I believe in always having the best, but they didn’t have any tables available for three, so it was impossible. #devastated  So, instead we are taking tea at the Montague, which appears to be a lovely hotel recommended to us by the kindly people we are staying with. I’m going to look stunning, let me tell you.

Back to the blazer, though! Every piece is custom made, so it is almost guaranteed to fit you perfectly unless you mess up your measurements somehow. They even sent me a tape measure to fit myself with. That’s quality customer service right there. So, I got some help and within a few minutes my measurements were uploaded to their site. Then, I had the opportunity to personalize it even further. I chose a boutonniere, because I fancy myself a Victorian dandy and will adore wearing a carnation in my lapel and pretending to be Oscar Wilde. (I’m still thoroughly convinced that I was him in one of my earlier incarnations. I’m so proud of all the things I once published!) I decided on two buttons instead of one because I think one buttons are passé. I had a slot sewn inside for a pen because I always have a Moleskine on me. And I had a monogram. It took me a long time to decide, but I chose: BENJAMIN PHILLIPS qu’il est beau. (“He’s beautiful.” Basically.) Never hurts to see a self affirmation. I clicked buy and waited. I waited for like three weeks.

Important side story now. In the meantime, my dear friend Alison invited me to pass out candy on Halloween with her. All our lives we’ve both lived in the country and she finally moved to town and had the chance to do it. I was ecstatic to do so as Halloween is my favorite holiday and I’ve always been denied this simple pleasure. I was going to be Indiana Jones for Halloween, but I couldn’t find a jacket that seemed right, so I switched to the vampire of Karl Lagerfeld. The teeth didn’t work out right, so I had to just be a pasty Karl Lagerfeld. You know how much I adore him, right? Someday I’ll meet him. Maybe he’ll make me his muse. Baptiste is handsome and all, but he’s had his time, it’s my turn! Anyway, I couldn’t be more delighted to be Karl. Karl has a very specific look. Dark wash jeans, high collar, driving gloves, a fitted (usually black) blazer, and glasses. So, I ordered all the pieces that I could find. I couldn’t find a high paper collar anywhere, I haven’t a clue where he finds his. He’s Karl, though, so he probably purses his lips and they arrive at his chic apartment on the rue de Lille. I found a black Calvin Klein blazer on eBay and bought it for a tremendous discount. I was deeply pleased.

In a strange twist of fate, both these blazers and the gloves were scheduled to arrive on the same day. It was probably the chicest day of mail that my house has ever experienced. The Calvin Klein one came first and I looked fine. It seemed a bit big in the arms, the shoulders were a bit wide, and I thought the sleeves were too short. But I didn’t really know any better. I thought to myself that I would take it to the tailor anyway, so I got dressed and had a delightful time passing out candy and trying to explain what I was. I don’t think many people in Perry even know who Karl is and that is très démodé. People thought I was the father from the Twilight series, “that guy,” and Andy Warhol. Wrong. I was Uncle Karl.

When I arrived back home, there was another box waiting for me with my new Indochino blazer! Excitedly, I opened the box and was shocked at how beautiful it was. The fabric was stunning. It felt wonderful to touch and I lovingly unpacked it from the very nice box it was shipped in. Taking off the Calvin Klein blazer, I slid into this gorgeous creation and was an instant convert. It fit perfectly everywhere. It was like it was molded to my body in the most flattering way. It moved naturally, it had no unseemly bumps, it was simply perfect. I looked in the mirror and then looked again and then looked again. I looked marvelous. I am deeply impressed with the high quality, the beautiful fabrics, and the reasonable price. It was only $249 and looks like it was worth much more. If I ever become a red carpet celebrity, Indochino can be assured that they will be making the majority of my ensembles. I am obsessed. So, of course, I had to take pictures.

Boom! There it is.

Really, I’m a normal person, not a supermodel. 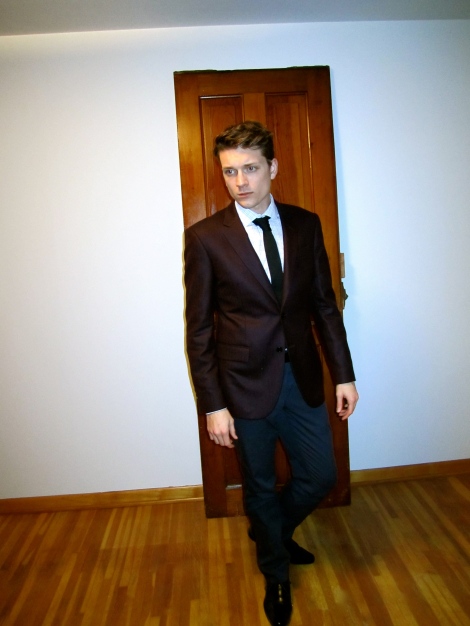 Here I am at an imaginary movie premiere. Will Zac be my date to the premiere of our movie?

I think I pull it off better. Sorry, Zac.

I really don’t know what is going on in this picture. I was jumping a bunch because it’s my signature pose, but my camera turned me translucent. It’s probably trying to tell me that it’s time for a fancy new camera. Or an iPhone. Either is good with me. Well, actually, I’ll just take the iPhone.

So, in summary, I’m passionately in love with this blazer. I will be buying the Prince of Wales suit very soon. Tomorrow I’m going to wear this blazer over a new rainbow sweater I just bought. I’m going to look so pretty.